Boardgame of power and empire in revolutionary Mexico, 1898-1920. Win if you become the next dictator of Mexico.

In the top 200 best strategy games on Board Game Geek. «Quite possibly the best produced card game I own. The artwork, text and functionality of each of the cards (they are all unique) is quite amazing. Game playing is fabulous – players are trying to topple the Mexican government by fair means or foul. The game is tremendously interactive with assets being hijacked, partners assassinated, roaming bands of soldiers appropriating all they can – despite the seething politics and change its no random take that fest – players need to find a strategy and work to it. The number of unique cards means this game has limitless replayability. My favourite Sierra Madre game.» – Paul Lister of Boardgame Guru.

Pax Porfiriana is Latin for “The Porfirian Peace”. It refers to the 33-year reign of dictator Porfirio Díaz, ruling Mexico with an iron hand until toppled by the 1910 Revolution. As a rich businessman (Hacendado) in the turbulent pre-revolutionary borderlands of the U.S. and Mexico, compete to build business empires of ranches, mines, rails, troops, and banks while subverting your opponents with bandidos, Indians, and lawsuits. Win by toppling Díaz, either by coup, succession, revolution, or annexing Mexico to the U.S. If Díaz remains firmly seated at the end of the game, then the player with the most gold is the winner. 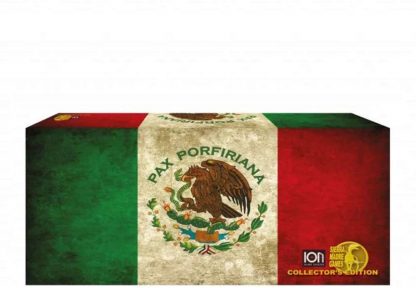