Coup blends the bluff and uncertainty of Hold ‘Em with the aggressive calling-out of Bullshit and a touch of deeper strategy, says Jon Seagull.

Coup (3-6 players, ages 10+, published by Indie Boards & Cards) is a delightfully vicious little card game that blends the bluff and uncertainty of Hold ‘Em with the aggressive calling-out of Bullshit and a touch of deeper strategy. It’s a game that clicks with gamers and non-gamers alike, and a friend of mine summed up the experience well as “a game you should be able to play for money.”

Players take on the role of power brokers in a futuristic dystopia. Each starts with two face-down cards from a 15-card deck (3 each of five different cards), and a bit of money. The cards represent members of the government under your control, and you amass money in order to assassinate or stage coups against the other players’ cards; turning them face-up and rendering them useless. Players with both cards revealed are out of the game; and the winner is the last person standing. 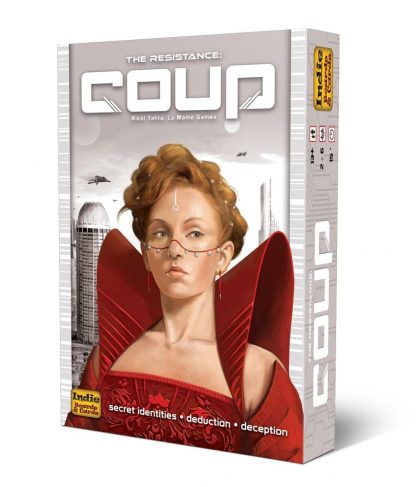